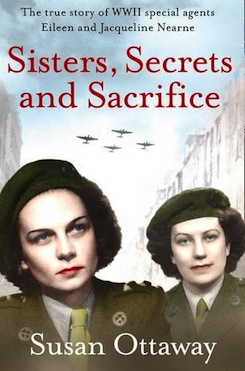 In September 2010 an old lady was found dead in her flat in Torquay. Her neighbours thought her a recluse and had called her the cat lady because her only companion was a ginger cat. When her flat was searched for the addresses of any family or friends, the 89 year old woman's true identity was discovered. Her name was Eileen Nearne and, in 1944, she had flown into German-occupied France as a wireless operator for the Special Operations Executive, attached to a circuit in the south of Paris. Further investigation revealed that she had been captured and incarcerated in Ravensbrück Concentration camp. So many people who found themselves in concentration camps did not survive but Eileen Nearne not only survived, she managed to escape from a work party, eventually meeting up with the advancing Americans in the spring of 1945.

Sisters, Secrets and Sacrifice tells the story of Eileen Nearne's war and that of her elder sister, Jacqueline, who was also an SOE agent and worked for a very large circuit for 15 months before being brought back to England suffering from exhaustion. Both women had remarkable, although quite different, experiences during the Second World War which affected them for the rest of their lives. As Eileen once said, she missed the danger and excitement of her time as an agent in Paris and, despite the horrors of her imprisonment, everything that followed was very tame by comparison.

Susan Ottaway was born in Windsor, brought up in Egham and educated at Sir William Perkins's Girls School in nearby Chertsey. The daughter of an aircraft engineer, she has had a lifelong enthusiasm for aeroplanes and books. She worked for four different airlines over a period of 20 years, mainly in the UK but also in Germany and Australia, and wrote her first book, a biography of Wing Commander Guy Gibson VC, before leaving the world of aviation. She then worked as a freelance editor and has since written six more books.
More about Susan Ottaway