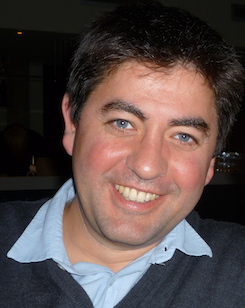 Tom Adams is an award winning television producer and author.  He was born in Yorkshire but now lives in Sevenoaks in Kent.  As a producer he has made documentaries on everything from David Livingstone (I presume) to the Berlin Wall, from the Seven Wonders of the World to the Industrial Revolution.  He was inspired to turn his hand to writing children’s books rather than for television, after his eldest son, then 5, started asking questions like ‘how do arms work?’  He now has three children’s interactive science books to his name: Feel the Force, Molecule Mayhem and That’s Life.  Molecule Mayhem won the Society of Authors/ ALCS Award for Educational Writing 2013.

I first contacted the agency when I was trying to get Feel the Force of the ground.  I had found a number of names in the Writer’s Yearbook and an internet search, and sent chapters off to a handful of selected agents.  Andrew responded saying children’s factual wasn’t his area of expertise and so he could not take the project on board.  However, despite it not being of interest to him, he still took the time to read my proposal, gave highly encouraging feedback and forwarded some names as to where I should send it.  I felt this was beyond the call of duty so when I came up with Beatles: By the Book, he was my first port of call.