Independence or Union?: The Scottish Question in History'
Tom Devine 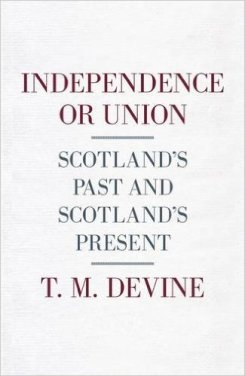 The rationale for the book   will be to attempt to provide an answer to a fascinating  historical puzzle.

In the 1950s unionism in Scotland had reached an electoral peak and the SNP was an irrelevant political sect rather than an effective party.Yet, within a generation or so,in the Referendum of 2014, 45 per cent of Scots voted for independence and despite the clear victory for  Unionists the debate rages on.What happened in 2014  will mean a radical  revision of the Union with consequences for the governance of the entire UK.

How is this transformation in attitudes to the union state and the continuing prospect of  Scottish independence to be explained?This volume,ranging widely over seventy years of history and examining political,economic,social,religious and cultural factors as well as issues of identity and the relevance of international influences,will seek to provide an answer.An additional aim is,while charting the decline of unionism,  to analyse at the end of the study why loyalty to the British state  remained resilient enough to register a clear victory for the No campaign in September 2014

- takes account of all  relevant academic writing from political science,history,economics,popular culture as well as  authoritative press features  on the subjects of nationalism in Scotland,unionism,Scottish history since 1945 and the Referendum itself

- written in a style to appeal to a very broad audience- a text from which academic peers can  hopefully learn but which reaches well beyond academe to appeal to all interested readers.The book will be written in the style The Scottish Nation

- the text could also serve as a fresh and up to date history of modern Scotland, rendered coherent with a central theme/question running throughout and  covering  the period comprehensively  in the spirit  of 'histoire totale'

Professor Sir Tom Devine is Head of the School of History,Classics and Archaeology, Director of the Scottish Centre for Diaspora Studies and the Sir William Fraser Chair of Scottish History and Palaeography at the University of Edinburgh, generally regarded as the world's premier Chair of Scottish History. Tom Devine was educated at Strathclyde University where he graduated with first class honours in History in 1968 followed by a Ph.D and D.Litt. He rose through the academic ranks from assistant lecturer to Reader, Professor, Head of Department, Dean of the Faculty of Arts and Social Scie...
More about Tom Devine