Scotland's Empire: The Origins of the Global Diaspora
Tom Devine 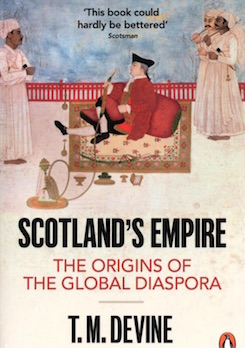 The Scots are one of the world's greatest nations of emigrants. For centuries, untold numbers of men, women and children have sought their fortunes in every conceivable walk of life and in every imaginable climate. All over the British Empire, the United States and elsewhere, the Scottish contribution to the development of the modern world has been a formidable one, from finance to industry, philosophy to politics.

Scotland's Empire puts this extraordinary epic centre stage, taking many famous stories - from the Highland Clearances and emigration to the Scottish Enlightenment and empire - and removing layers of myth and sentiment to reveal the no less startling truth. Whether in the creation of great cities or prairie farms, the Scottish element always left a distinctive trace, and Devine pays particular attention to the exceptional Scottish role as traders, missionaries and soldiers.

This major new book is also a study of the impact of this global world on Scotland itself and the degree to which the Scottish economy was for many years an imperial economy, with intimate, important links through shipping, engineering, jute and banking to the most remote of settlements.

Filled with fascinating stories and with an acute awareness of the poverty and social inequality that provoked so much emigration, Scotland's Empire will make its readers think about the world in quite a different way.

Professor Sir Tom Devine is Head of the School of History,Classics and Archaeology, Director of the Scottish Centre for Diaspora Studies and the Sir William Fraser Chair of Scottish History and Palaeography at the University of Edinburgh, generally regarded as the world's premier Chair of Scottish History. Tom Devine was educated at Strathclyde University where he graduated with first class honours in History in 1968 followed by a Ph.D and D.Litt. He rose through the academic ranks from assistant lecturer to Reader, Professor, Head of Department, Dean of the Faculty of Arts and Social Scie...
More about Tom Devine