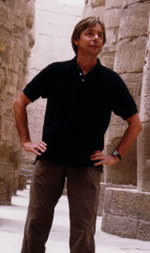 Tony Spawforth trained as an ancient historian and archaeologist. He is a former Assistant Director of the British School of Archaeology at Athens and Member of the Institute for Advanced Study, Princeton. Since 2000 he has been Professor of Ancient History at Newcastle-upon-Tyne University.

He is author and editor of a number of academic and reference books, including (co-edited with Simon Hornblower) the third edition of The Oxford Classical Dictionary (1996; 2003). His popular books include (with Chris Mee) Oxford Archaeological Guides: Greece (2001) and The Complete Greek Temples (Thames & Hudson, 2006). His books have been translated into Spanish, Italian, Modern Greek and Hungarian.

His broadcast work includes presenting eight archaeological documentaries on BBC2 (1996-2000) and numerous appearances as an expert on TV and radio.

I found the Andrew Lownie Literary Agency in about 1990 on the strong recommendation of a friend of a friend. Oxford University Press had asked Simon Hornblower and myself to undertake a third edition of The Oxford Classical Dictionary. We realised that we needed a good literary agent not only to negotiate our own contracts but also the terms for contributors, which as a result turned out to be generous by the standards of UK reference works at the time. I have stayed with Andrew Lownie ever since.