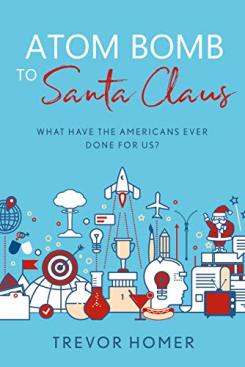 If you’re not American it is difficult to understand the USA. It is easier perhaps to mock what might be a fading empire.

The Trump presidency  divided opinion around the world and the  growing Chinese model could usurp American capitalism, and another Cold War might be on the horizon.

So - how should the world feel about the USA, and does it matter?

These are important questions we ask ourselves, and Homer argues that the best way to properly understand the USA is to understand what has already come out of this land.

Atom Bomb to Santa Claus demonstrates that the USA itself is not an empty vessel seeking only its own ends, but an indispensable key to the future of civilisation as we know it.

Ever wanted to know when computers started, or who discovered the Polio vaccine?

Could you imagine that today’s smart phones would not exist without technology designed to guide torpedoes, and incidentally, that it was invented by one of the all-time great Hollywood stars? (She didn’t make a penny from it).

You may be surprised to know that Marconi did not invent radio although he was awarded the 1909 Nobel prize in physics for it. The patent was finally awarded to the proper inventor a few monthss after he died.

The best-known gangster in history was American, so was the inventor of the frisbee. Big Macs and Heinz baked beans are eaten around the world and yes, as we know, they are American.

The list goes on: Scientology, Elvis, Open Heart Surgery, the Internet, Jazz, the US Masters and the Jumbo Jet (aka the Boeing 747). All American of course, as is so much more.

But Santa Claus?!?!? Can this possibly be true? If you’ve ever wondered……this is the book for you.

Trevor Homer is an author and businessman, living and working in the West Midlands.He is the author of The Book of Origins. The book aims to show the origins of almost everything, from Art to Zoos via Sport, Language, Buildings, Money, Crime and lots more. The Book of Origins was published in the UK in 2006 by Piatkus Books, now part of Little, Brown Group, and published in the USA by Penguin. It has been sold to ten other countries.Trevor’s second book, Born in the USA, chronicles most of the great advances in the human race that were brought about in the USA. Born in the USA was pub...
More about Trevor Homer