The Book of Origins
Trevor Homer 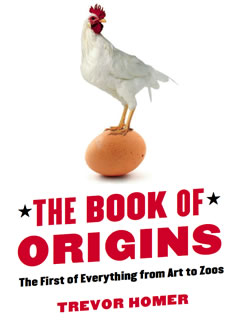 Everything has an origin.

This book is for people who want to know how, or when, things began, where they came from, why they started. And when it has a human origin, such as the Mongol Empire or Ferrari cars, the name of the person who started it.

Everyday items such as the clothes we wear, the food we eat, the films we watch, the medicines that cure us, the languages we use, all began somewhere (and the answers are often not what you expect).

This fascinating miscellany celebrates the work of explorers, scientists and inventors … people who aimed to find out how the world works, and ended up discovering something no one had ever seen before.

Ever wanted to know when computers really started?

Or who really discovered America?

Did you know that Stone Age man built the first solar observatory?

Ever wondered who the first ancient Olympic champion was?

Would you be surprised to learn that the modern Olympics began in a small Shropshire town?

Or that Marconi didn’t invent radio?

If you’re intrigued by these questions… this fact-filled book is for you!

Trevor Homer is an author and businessman, living and working in the West Midlands.He is the author of The Book of Origins. The book aims to show the origins of almost everything, from Art to Zoos via Sport, Language, Buildings, Money, Crime and lots more. The Book of Origins was published in the UK in 2006 by Piatkus Books, now part of Little, Brown Group, and published in the USA by Penguin. It has been sold to ten other countries.Trevor’s second book, Born in the USA, chronicles most of the great advances in the human race that were brought about in the USA. Born in the USA was pub...
More about Trevor Homer