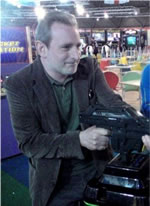 Alan Baker was born in 1964 in Birmingham, UK, and attended the University of Reading, where he obtained a BA (Hons) Degree in English Language and Literature. His first book, Destination Earth, was published in 1998, and since then he has published a further nine books on a variety of subjects ranging from UFOs, ghosts and occultism to gladiators, Vikings and medieval knights.

Over the last couple of years, Alan has turned his attention to fiction writing. His steampunk novels The Martian Ambassador and The Feaster from the Stars have been published by Snowbooks Ltd, and he has just sold his supernatural mystery The Lighthouse Keeper to the same publisher. The Martian Ambassador and his unpublished novel Dyatlov Pass have both been optioned for film.

His principal areas of interest are the paranormal and unexplained phenomena, and he has spent more than twenty years researching and writing on these subjects. He lives in Hove, East Sussex.

I had a proposal for a non-fiction book, and approached a number of agents by letter (their names gathered from the Writers and Artists Year book). The vast majority turned me down, but Andrew wrote back suggesting I send him a more detailed proposal than the one I had. Within a few days, he had contacted me to say that he and his reader liked it, and that he had decided to take me on. Less than two months later, Andrew secured a two-book deal. I've been with him ever since, and never once have I doubted his absolute commitment to his clients. From my experience, I can say that he will not hesitate to stick with a project he believes in, even if it takes longer than anticipated to find a home for it.