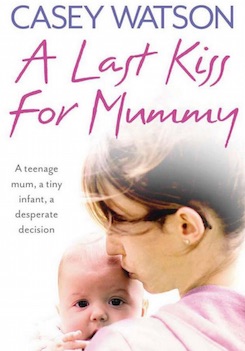 ‘Casey?’ asks John Fulshaw one chilly autumn morning. ‘Have you ever considered fostering a young mother and  her baby?’

Straight away,  Casey’s interest is piqued.  She loves babies, and as a newly fledged gran, she’s also used to them. And it would certainly make a big change from the last kids she’d fostered – two challenging nine year old boys with very different needs. Not that this wouldn’t involve its own traumas, obviously,  as the mum in question, Emma, who’s not long turned fourteen, has come from difficult circumstances herself. It seems her mum threw her out when she refused to have an abortion and since then she’s been living with various friends. Not only that, there’s the complicating factor of a boyfriend, Tarim, who’s now in prison for possession of drugs.

A pre-placement meeting is arranged where John explains to Mike and Casey that no decision has yet been made about whether Emma can keep her baby, and that a full assessment on her fitness to look after him needs to be carried out. Emma is already well known to social services, as her mother, who has chronic drug and alcohol problems,  has placed her in foster care many times over the years.

Moved and saddened by the plight of this poor child and her newborn, Casey and Mike agree that they will take them both in, and though it’s a massive shock to have a newborn in the house 24/7, they both relish  the challenge  of supporting her. And it is a challenge. Still very much a child herself – one who’s never been properly mothered – Emma finds caring for little Roman hard. And being so young herself means she struggles with the responsibilities of parenting, often refusing to get up at night to feed her baby, and  ‘forgetting’ to bath him and change him. This obviously puts a strain on the family – a baby needs round the clock care and someone has to do it – and it soon becomes clear to Casey that she’s doing something she never thought she would, allowing her personal involvement to colour her judgement,  covering up for Emma’s  shortcomings so  her social worker sees her in a good light.

Casey tries to reassure herself: this is not out of a lack of responsibility; it’s an act of faith. Because the more Casey gets to know Emma the more she’s convinced that with the right help and guidance, this lonely, unsupported girl can and will become a good mother to the gorgeous little boy she’s brought into the world. But as events begin to happen that throw all of that into question, she can keep up the subterfuge no longer. Social Services decide that in the best interests of the baby, he must be taken from Emma and officially placed into care.

Which leaves Casey with a heartbreaking dilemma. She can either continue to care for Emma, while baby Roman is placed elsewhere, or she can do the opposite – keep the baby and let Emma go.  How on earth is she to choose who needs her most?