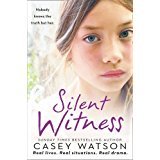 It’s Christmas Eve when Casey and Mike Watson receive a call from their fostering Link Worker with an unusual request.  Though they are on a break, ready to take in a new child in the new year, he wants to know if they’ll take in a distressed twelve year old girl within the hour. Bella, it turns out, has just been placed in care; she’s been at an emergency placement for just under a week, after being taken from her home following an incident of domestic violence.

‘She’s severely traumatised,’ says John, going on to explain that it’s because they are pretty sure she’s witnessed an act of potentially fatal violence, about which she will not, or cannot, speak. ‘Violence meted out by her mother,’ John clarifies. ‘She’s beaten the step-father half to death with a house brick. He’s still in ITU as we speak.’

John's not able to tell Casey a great deal more. Only that Bella’s mum and her partner have always had a volatile relationship; violent fights and drunken arguments have been the norm. Social services have been called out on a couple of occasions in the past, neighbours having insisted that the child must be at risk, just from the screams and shouts they could hear from next door. However, according to the social workers who saw her on these occasions, Laura, Bella’s mpther, seemed to love her daughter passionately, and had convinced them that she was going to make things change. She had also assured them that her partner never laid a hand on Bella – only on her, and only when he drank – something he was apparently getting help for.

Those assurances now seem rather hollow. The violence had obviously flared again, the result of which was that Bella’s step-father was now fighting for his life in hospital and Bella’s mum, who is claiming she was acting in self-defence, is on remand in prison, leaving Bella deeply traumatised and with nowhere to go. Yes, there are maternal grandparents keen to have her, but Bella has categorically refused to go there, so up to now she’s been with emergency carers.

It’s an unlikely situation – and a completely open-ended one as well. ‘I can’t tell you how long you’ll be having her,’ John tells them candidly, ‘because no-one’s in a position to make any plans yet; not till there is evidence one way or another about whether the attack was in self-defence. Or attempted murder. Or, indeed, murder,’ he finishes. ‘I'm half expecting a call to that effect any day.’

There’s no question that Casey and Mike will take Bella in, and the family quickly rally round to welcome and support her in the most frightening and bewildering Christmas she has ever known. But it’s with heavy hearts. Because whatever happens now, this poor child’s life has disintegrated around her, and the chances of her being reunited with either parent again are slim, even if her father pulls through.

And only she can tell the truth about really happened that night. Because she’s the only witness…