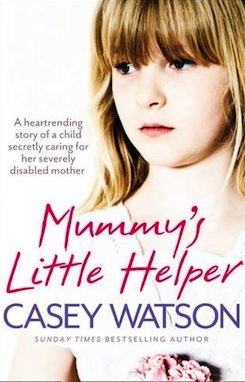 Casey takes an urgent call from John Fulshaw, her link worker, asking if she and Mike would consider taking on a ten year old girl, Abby, whose mother Sarah has been rushed into hospital after a collapse. There’s no father, and  Abby’s mum has become increasingly disabled since being diagnosed with multiple sclerosis. It also transpires that, amazingly, Abigail has cared for her  mum single-handedly since she was little more than a toddler, gradually learning to shop, cook and clean, and attend to her mother’s personal care.

But now Sarah’s in hospital, this has come to an abrupt end, and as there are no relatives who can step in and care for little Abby, there’s no choice but to take her into care. Though not fitting the usual profile of a child for the Watsons, Casey and Mike, having said goodbye to their last child a few weeks back, are happy to step in and help out.

But the short term ‘loving temporary home’ they had thought they were providing, soon turns into something more long term. With Sarah getting sicker, it seems there may be no home to return to and Abby, her whole life changed overnight, is becoming increasingly distraught.  Used to doing everything for herself and her mother, Abby’s anxiety at losing control becomes a cause for concern, and a call to the Casey’s GP confirms her own fears – Abby is developing OCD.  She’s beginning to develop a range of obsessive compulsions, such as hand washing, light switching and wall patting, as well as systematically pulling out her hair.

Casey’s stumped – surely there’s someone in Abby’s life who could help support her? It seems that bar Casey’s son Kieron, with whom Abby has at least built a bond, she doesn’t have a friend in the world. But then intriguing news comes, via Casey’s sister,  Donna, who’s met Abby, that Sarah might not be telling them the whole truth. But what’s she hiding, and why? Casey finds it hard to fathom. And when her tentative enquiry is met with an angry denial, she begins to wonder just what is going on.

But it seems Sarah is intent in keeping the family skeletons hidden – so much so that she makes an official complaint about Casey, accusing her of unprofessional conduct. For the first time since she began fostering, Casey’s torn. Does she throw in the towel and stop looking for answers, as she’s been warned to?  Or hang in there and continue to search for the truth, whatever the personal cost to her...