Nowhere to Go: : The heartbreaking true story of a boy desperate to be loved
Casey Watson 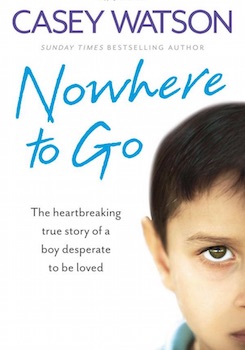 ‘Casey,’ asks John Fulshaw. ‘Can you come to the police station?  I know it’s unusual, but we need you to meet Tyler.  He’s 13 and has just been arrested. He stabbed his step mother, apparently,  and she won’t have him home. I’m afraid I had no-one else to call.’

So begins Casey’s relationship with Tyler. She’s on her way home from hospital when she takes the call, where she’s just dropped her father off to have a major operation, so It’s not the best time - she’s already feeling teary and anxious.

But she doesn’t want to let John down and as she pulls back out into the traffic, she decides that if anything’s going to take her mind off her worries, its being plunged into the middle of someone else’s. John’s sketched out only the minimum of details. Tyler’s been living with his dad and stepmother since he was three, his real mother, a heroin addict, having died after taking an overdose. Her death, Casey muses sadly, must be his earliest memory.

When Casey meets Tyler, he is like a raging bull, spitting and swearing at  the police officers trying to restrain him, and using language that even makes Casey blush. Bemused, watching John, a social worker and two police officers trying to calm him down, Casey suddenly finds herself laughing out loud - causing Tyler to stop his thrashing about and look at her as if she’s deranged.  She doesn’t know where it came from – perhaps a reaction to the stress her own family are going through right now – but it certainly seems to have done the trick. ‘God, I’m sorry,’ she tells Tyler, who is still eyeing her suspiciously, ‘but you just reminded me so much of Bart Simpson then. You know, when you just said “fuck you, Mr Burns!’’ She glances at the policemen, who seem to have decided she’s mad too. ‘I’m  sorry,’ she says. ‘It just made me laugh.’

Tyler seems to agree, though he still looks pretty lary. ‘It’s my social worker innit?’ he tells her. ‘He’s a knobhead!’ It’s an interesting first meeting, for sure…

Inevitably, Tyler, who displays all the problems associated with a child born to a methadone addicted mother,  ends up moving in with the Watsons.  And while Casey cares for her sick father and  tries to support her mother, she and Mike  are now in loco parentis for a boy who’s so angry at life he’s like a whirlwind.  While his  trial for the stabbing looms ever closer, the Watsons soon find themselves with trials of their own, as Tyler’s aggression reaches dangerous levels.

Nowhere to Go: The heartbreaking true story of a boy desperate to be loved tells the story of a boy filled with rage,  for whom Casey and Mike are the last chance saloon if he’s to have any hope of not plunging ever further down the road to a life of violence and crime. And key to doing that is the slow process of peeling back the brittle layers and revealing the lonely boy cowering beneath; a  vulnerable child still in pain from the death of his mother, and, as Casey finds out, when Tyler begins to open up, a boy who’s life has been further blighted by rejection and indifference by a breathtakingly cruel and callous father. But can they succeed? Emotionally exhausted by the travails in her own family, Casey knows she’s taking on her  toughest challenge yet…