The Girl Without a Voice
Casey Watson 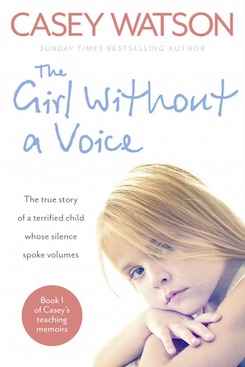 Imogen is 13 and has selective mutism. An easy target for bullies because of her apparent inability to speak, she’s just moved to the  comprehensive school where Casey works running ‘The Unit’, a special place in school for troubled kids. Imogen has just moved in with her grandparents  (hence the school move), who are as mystified about this sudden development as Casey is intrigued, saying it’s come on out of the blue  along with the move.

Anxious to help this anxious girl, Casey does some investigating, and finds out that she used to live with her divorced father and his second wife, and that the move to the grandparents has arisen out of difficult circumstances. It seems that despite the poor woman making every effort to connect with her, Imogen hated – and still hates -  her ‘stepmother’. As a result, Imogen has been very cruel to her father’s second wife, and has been getting increasingly difficult to handle. This is the reason why her father felt he really had no choice but to ask her to go and live with the paternal grandparents. It isn’t ideal, even though Imogen seems to prefer it, as they are quite elderly and frail.

Imogen is sent to the unit almost as soon as she joins the school, because it’s felt that in a classroom setting, even though she’s a clever girl, she isn’t going to cope well with the taunts. There is also the problem of her mutism preventing her from engaging, which is having a detrimental effect on her learning.

There is  apparently no physical reason why Imogen doesn’t speak,  and it urgently needs to be addressed. She always has a kind of dead expression on her face, which never alters - even when she is being bullied. And she gets bullied constantly, for her dumbness and  for her curly, ginger hair. She was bullied at her last school as well, Casey finds out, once she digs further, about the fact that her mother – who’s not been around for a few years now – just upped and moved to France with her lover. And it didn’t take much digging – it’s apparently common knowledge that the poor child was abandoned for a boyfriend, without a backwards glance.

But as invariably the case with troubled kids, it’s not that simple.  As Casey investigates further, driven by her wish to get Imogen her voice back, she finds out there’s much more to this poor girl’s distress than anyone, Imogen included, is letting on.

The first Casey Watson title centred on her life before fostering, The Girl Without a Voice is one of many moving stories of the children who spend time under her care in ‘The Unit’ – a place of sanctuary in the midst of a huge urban comprehensive for kids who, for all sorts of reasons, don’t ‘fit in’ – the job that directly led to Casey’s desire to go into fostering.