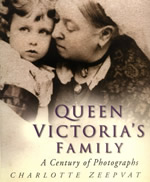 Today it is hard to imagine royalty without attendant paparazzi but in the first half of Queen Victoria’s reign, photography was still in its infancy. The earliest royal photographs to be published had such an impact on the public that, before her youngest children had left the nursery, commercial photographs were available on the streets and were finding a ready market. Photography added a new dimension to the perception of the monarchy. For the first time ordinary people could see exactly what the Queen looked like and they became aware of her family as human beings, who wore everyday day clothes, not gold and ermine, who were confident or shy before the camera, and whose children frowned, sulked or fidgeted, just like their own. The Queen’s grandchildren and great-grandchildren grew up in front of the camera lens. Their clothing and hairstyles were copied and it became popular to collect royal photographs and display them beside the more humble subjects in the family album.

This album of Queen Victoria’s family explores the lives, personalities, tastes and contributions to history of the Queen, her children and her children’s children through four generations. It brings together over three hundred images, both intimate and formal and many previously unpublished, of a family spread throughout Europe who have played a large part in shaping the world as it is today. From the Queen’s own children – the future Edward VII wearing the very first sailor suit which set the fashion for the next century; Prince Leopold dressed for a costume ball on his sixth birthday, looking over a book with his brother Arthur – the photographs recall a whole spectrum of characters, attitudes and interests. The German Kaiser Wilhelm II appears as a tiny child at Osborne with his little aunt Beatrice as well as in his more familiar guise of war leader; the murdered imperial family of Russia gaze tranquilly at the camera from a more peaceful age and a Queen of Spain wears nursing uniform in the course of her war work. Queen Victoria’s line includes seven canonised saints, several individuals honoured for their help to the Jews in the Second World War, influential patrons of medicine and the arts, military and naval commanders, sportsmen and women and many of today’s sovereigns. On the other hand, a few of her descendants became confirmed Nazis or fell from grace in other, less public ways, but all inherited something from their formidable ancestor. Together their stories add up to a fascinating account of the extended family and the times in which they lived.