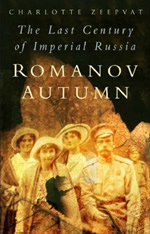 The Romanov dynasty ruled Russia for a little over three centuries and its name and story exerts a lasting fascination. In recent years attention has focused almost exclusively on the dynasty’s dramatic end and this book seeks to widen the picture, drawing material from the last century of imperial rule. It was a compelling time and a time of contrasts, when the Tsars reached the peak of their wealth, their prestige and their power, yet also faced the growth of forces which would destroy them.

In 1817, a hundred years before the Revolution, the first Nicholas and Alexandra were married in the Winter Palace. The book opens with their story. As the spotlight moves on we see the last three Tsars, Alexander II, Alexander III and Nicholas II, each trying to steer his own course between reform and control, helped or hindered by the brothers, sisters, wives, mistresses and children whose stories are told in the book – and in its last century the dynasty produced many sympathetic and gifted characters as well as some who were far less admirable. Alexander I’s sister-in-law, Grand Princess Elena Pavlovna, survived an appalling marriage to become influential in bringing political, medical and artistic change to her adopted country; Grand Prince Nikolai Konstantinovich was disgraced for stealing from his mother. He became something of a local hero in Tashkent, where he was exiled, adopting Revolutionary colours with glee while, in complete contrast, his brother Konstantin was a friend of Dostoevsky and one of the most gifted writers of his generation, still much admired in Russia today. Alexander II’s mistress Ekaterina Dolgorukaya, his ‘Wife before God’, lived a hidden life for fourteen years before the death of his wife enabled him to bring their relationship into the open; his son Grand Prince Vladimir and daughter-in-law Maria Pavlovna contributed to the dynasty’s downfall with their taste for self-aggrandizement; and Princess Elena Petrovna, a daughter of the King of Serbia, told a remarkable story of survival in her escape from the Ural Bolsheviks.

Then there are the ordinary people drawn into the Romanov story. Vassili Zhukovsky, the illegitimate son of a Turkish captive, became tutor to the heir to the throne and his teaching influenced the sweeping reforms of the 1860s. An Irishwoman, Mary Anne Orchard, was nanny to the last Tsaritsa in childhood and stayed with her ‘baby’ until her own death – ‘Orchie’s Room’ in the Alexander Palace at Tsarskoe Selo, was preserved unchanged until the Revolution. Other devoted attendants like Anastasia Hendrikova and Ekaterina Schneider followed the last Tsar’s family to Ekaterinburg only to be shot by Revolutionaries. This book takes an unusual approach to a popular subject by interweaving the personal stories of individual members of the dynasty with the history of their palaces to build up a broad panorama of the final century of imperial rule. The book draws on old eye-witness accounts and on archive material released in Russia in recent years to examine the dynasty and its characters with a fresh eye. In doing so, it provides a wealth of information for anyone interested in the history of the Imperial family. The perspective shifts and changes, threads of the story cross and re-cross and important events are seen from the differing viewpoints of the people who lived through them but the central theme remains: a royal family in its years of growth, its years of prosperity, its crises and its disintegration. The final chapters tell the stories of those who escaped, and of those who did not.