The Camera and the Tsars: A Romanov Family Album
Charlotte Zeepvat 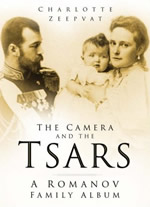 One summer day in the late 1850s Tsar Alexander II and his Court were relaxing in the park at Tsarskoe Selo when a man approached the group unseen and set up a camera – still known in those days as the ‘marvellous apparatus.’ A lady-in-waiting saw him but he asked her to say nothing and let him take his photograph. If it succeeded, he said, it would give a unique insight into the Tsar’s personality; ‘Nobody has ever seen his Majesty at such ease.’ He took the picture but it would never see the light of day as anxious courtiers surrounded him, pleading for its destruction. ‘It was a sacrilege – to have caught his Imperial Majesty laughing, seated on the grass.’

This story illustrates both the impact of early photography and the slight otherworldliness that gave the Russian imperial Court its mystique and its fascination. There was no other Court in Europe where the person of the monarch would have been held in such reverence that even to admit his or her humanity would have seemed a sacrilege. Fortunately the Tsar and his descendants did not share the unease. Alexander embraced photography with as much enthusiasm as his royal counterparts across Europe and by the 1860s imperial photographs were readily available across Russia and beyond and were collected avidly. The earliest photographs, up to the 1870s, were often quite intimate. The Tsar liked to be photographed with his favourite dog, ‘Milord’ and his wife was pictured working on her embroidery: portraits of their children often included toys. It was left to a later generation to capture the splendour of the imperial Court – the Tsars in all their wealth and power reviewing Russia’s armies or meeting world leaders; the Empresses in full Court dress, decked out with a dragon’s hoard of jewellery. These photographs were meant for public consumption but advances in camera technology from the late 1880s ushered in a world in which many members of the imperial family had their own cameras and the private snapshot was treasured alongside the studio portrait in the family albums.

This unique album of formal and informal photographs, many previously unpublished, acts as a window into that lost world. From the beginnings of commercial photography in the time Alexander II, photographs tell us so much about the Romanov family, in individual faces and expressions; likenesses passed down the generations; costumes and customs and what it was like to be born and to grow up in that most rarefied of royal Courts. We see working life and play, duty and relaxation, relatives at home and overseas. Some of the most emotive images in the books are the amateur snapshots from private albums which capture the imperial children at play, growing from infancy into adulthood and experiencing the milestones of family life. The combination of photographs and long detailed captions, often including quotations in the subjects’ own words, tell the imperial story across four generations, from power to fall to exile, and the changing ways in which the dynasty is remembered in Russia today.