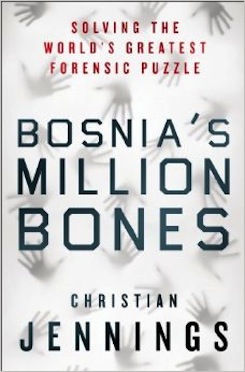 What it would be like to be tasked with finding, exhuming from dozens of mass graves, and then identifying, using DNA technology, the intermingled human remains and mangled body-parts of the estimated 8,100 victims of the 1995 Srebrenica massacre in eastern Bosnia? One leading forensic scientist commented that it would be like “solving the world’s greatest forensic science puzzle.”

And in 1999 one DNA laboratory, run by one small international organisation in Sarajevo, the International Commission on Missing Persons, set themselves the task of doing just that. And this is the story of that laboratory, that technology, and that organisation.

Twelve years later, the ICMP are the world’s acknowledged leaders in the extraordinary, rarified world of using DNA-assisted technology and forensic science to assist in finding, and identifying, thousands and thousands of persons missing from wars, genocides, human-rights abuses and natural disasters. These range from Bosnia to Hurricane Katrina and the Asian tsunami, to being INTERPOL’s on-call agency for DVI, or Disaster Victim Identification, to identifying victims of Saddam Hussein in Iraq, and to providing advice in the aftermath of 9/11. ICMP have also identified victims of apartheid in South Africa and of war crimes committed in Chile in the ‘seventies. They have helped scientists and governments from countries like the UK, Germany, Russia, Norway, Libya, Colombia and Iraq on improving their DNA identification skills and finding missing persons. Their forensic science techniques have, as a result, become the latest weapon in the armoury of international justice and human rights.

The ICMP sprung out of the massacre at Srebrenica. There are 206 bones in the human body post-puberty, and in 1995 an estimated 8,100 Bosnian Muslim men and boys were massacred at Srebrenica by Bosnian Serb forces lead by former General Ratko Mladic, now on trial for genocide and war-crimes at the UN Tribunal in The Hague. 206 multiplied by 8,100 makes 1,668,600, and this was the number of potential body-parts and bones, mangled and scattered across dozens of mass graves in the mountainous wilds of eastern Bosnia, that forensic investigators from the ICMP and the Hague Tribunal were looking for. This year, eighteen years after the massacre, the ICMP has found and identified, using DNA, more than 80% of the exhumed bodies and body-parts, their remains returned to their families for proper and dignified burial.

The story of how they did it, becoming in the process the world’s leader in their field, is set against the story of the sixteen-year manhunt for Ratko Mladic, the most high-profile war-crimes suspect to stand trial since the Nazis, indicted on the first charges of genocide to have taken place in Europe since the Holocaust. Mladic  vanished in 1997 in Bosnia after the end of the war, as British and NATO special forces started arresting his deputies. He was next seen in a tiny rural village in central Serbia in 2011, arrested by two dozen Serbian intelligence agents, and then transferred to face trial in The Hague. Where had one of the world’s most-wanted men been for sixteen years? Despite a manhunt across south-eastern Europe involving investigators from the Hague Tribunal, police officers, special forces and intelligence operators from Britain, the United States, Canada and EU countries such as France and Germany, Mladic had evaded capture.

This book is the story of real-life CSI, and the anatomy of a manhunt. It draws on inside access to world-class forensic scientists from ICMP, war-crimes investigators from The Hague, as well as police officers, soldiers, intelligence agents, diplomats and humanitarians from sixteen different countries. It is written by an author who is a widely-published investigative foreign correspondent who has worked as a staffer for ICMP, and followed the hunt for Mladic across the Balkans for more than a decade, reporting for British publications ranging from The Economist and The Scotsman to Wired magazine.