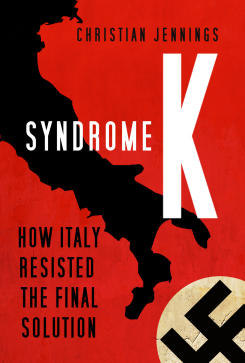 When the SS and Gestapo arrived in Italy in October 1943 to implement the Final Solution, the British, Americans and the Vatican knew they were coming. Allied codebreakers at Bletchley Park had been cracking the SS’ encoded signals since early 1942, so when a  small cadre of SS and Gestapo officers arrived in Rome with orders from Berlin to begin arresting Italy’s 45,000 Jews, the Allies worked out what was coming next.

After what they’d already handled in concentration camps and with deportation and killing squads in Poland, France and on the eastern front, these SS teams thought dealing with Italy’s Jews would be a straightforward matter. But they were to be proved very wrong. In no other country was the resistance to the Holocaust so determined and effective.

When Italy surrendered to the Allies in July 1943, and the Germans invaded, there were some 45,000 Jews in Italy: 7,500 of them would die in Mauthausen or Auschwitz, but an astonishing 38,000 would survive, the most in any country occupied by the Third Reich. The Germans predominantly failed to make the Final Solution Italy work. Why?

Syndrome K tells the story of what happened. Firstly, Allied cryptanalysts had cracked Code Orange, the SS Enigma cypher, in April 1942: they could read crucial messages from Berlin to the SS in Rome, meaning they knew significant amounts about the ongoing Holocaust, often including the exact numbers of inmates dying in each concentration camp on any given day. They shared this information with the Vatican, and so the Catholic Church helped hide Jews in Italy’s thousands of churches and convents. The British SOE and American OSS also parachuted agents to help Italian partisan groups, who tied down large numbers of German troops, attacked Jewish detention camps, and tried to immobilise Holocaust rail convoys. Italian policemen, railway officials, civilians of every kind, and even German diplomats helped obstruct Adolf Eichmann’s genocidal plan.

Syndrome K itself was a fictitious, deadly disease invented by ingenious and brave Roman doctors hiding Jewish families in their hospital: the fake illness frightened off frequent German search squads. Jews also posed as members of the Vatican’s Palatine Guard, fought as partisans, hid on farms, and in basements and attics. The incompetence and corruption of the SS and Gestapo helped enormously. Often more interested in looting gold and art than deporting Jews, of nine senior SS officers involved in the Final Solution in Italy, five worked as double-agents with Allied intelligence.