The Third Reich is Listening: Inside German code-breaking 1935-‘45
Christian Jennings 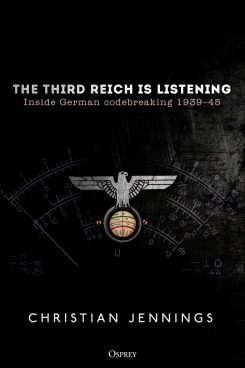 For the first time in English, the inside story of Germany’s huge pre-war and wartime codebreaking operations is brought together in one book.  The Third Reich is Listening is the comprehensive account of the successes, the failures and the science of Germany’s codebreaking and signals intelligence operations from 1935 to 1945. This fast-moving blend of modern history and popular science is told through colourful personal accounts of the Germans at the heart of the story, and through the bigger strategic picture.

The German navy’s signals intelligence service, the Beobachtungsdienst, or B-Dienst, began trying to crack the codes of the Royal Navy long before the war. Leading the attack was a German cryptanalyst called Wilhelm Tranow, who helped read the signals and pinpoint the exact locations of many British warships and convoys, increasing Germany’s strategic advantage in the bloody Battle of the Atlantic.

Personal stories include those of a codebreaker from Wehrmacht HQ, a German former astronomer and mathematician who worked out the order of battle of the British Expeditionary Force in 1940. And a young German Jew, educated at Oxford, who helps intercept U.S diplomatic signals from Cairo detailing Allied intentions in North Africa. Meanwhile a German woman from the foreign ministry codebreaking section decrypts the signals of the Italian Army and the Japanese foreign ministry, while a young U-Boat commander is on the front line, ambushing Atlantic convoys.  Technicians from the German Post Office listen to Churchill’s scrambled radio-telephone communications with President Roosevelt, detailing the timings of Operation Overlord and the invasion of Sicily.

The Germans were also reading a huge variety of American, French, Swiss, Spanish and other military and diplomatic codes.   And yet there were huge disasters too: their failure to predict the precise locations of the D-Day landings, to understand the Red Army’s intentions at Kursk, and their institutional blindness to the fact that the British at Bletchley Park had cracked the Enigma cypher.  Swiss intelligence told the Germans that it was compromised, and the naval cryptanalyst Wilhelm Tranow believed them. He urged his superiors to change their operational coding strategy. But to no avail.

The book investigates the Germans’ sprawling, decentralised code-breaking apparatus of some eight competing agencies whose leaders – Göring, Canaris and Heydrich – distrusted each other fiercely, and whose overall commander, Hitler, often failed to act on first-rate intelligence. And it investigates how and why a regime as technologically advanced as the Third Reich both succeeded, and failed, in its battle to break their enemy’s codes, and to use the resultant intelligence effectively.