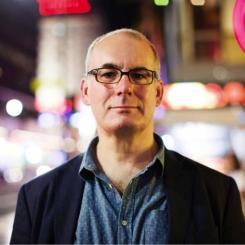 ‘David Quantick has a medical condition whereby he literally cannot be unfunny.’Caitlin Moran David Quantick was born in 1961 and grew up in Devon. He has written for magazines and newspapers for 30 years, mostly the New Musical Express and Q magazine. He has also pursued a parallel career as a television writer and radio broadcaster with his own critically-rated shows One, 52 First Impressions and The Blaggers Guide, and has written for TV comedies including Veep (for which he won an Emmy), The Thick of It, The Day Today and many others. He also appeared in Celebrity Come Dine With Me, in which he came fifth out of five contestants.

David’s e-novel Sparks was described as ‘excellent’ by Neil Gaiman while his crowd-funded novel The Mule was described as ‘ingenious, likeable, funny and entertaining’ by the Spectator, ‘a Da Vinci Code with laughs’ by the Independent, and ‘offbeat and funny’ by Jonathan Coe.

He also wrote the Sunday Times top ten best-selling unofficial Grumpy Old Man books, assisted Eddie Izzard with his autobiography Dressed To Kill, and is the author of two writing manuals, How To Write Everything and How To Be A Writer.

David’s film script Snodgrass, based on the novella by Ian R McLeod and starring Ian Hart as John Lennon, is about to go into production this summer, followed by a film of his novel, Sparks.

David lives in Hastings with his wife and two children.

‘I will go back to reading David Quantick's excellent Sparks now.’ - Neil Gaiman

‘If you choose to only live in one alternative reality make sure it’s the one in which you read Sparks by David Quantick.’- Ben Aaronovitch

‘Unfolds like The Da Vinci Code, only with a sense of humour and better grammar.’ - The Independent