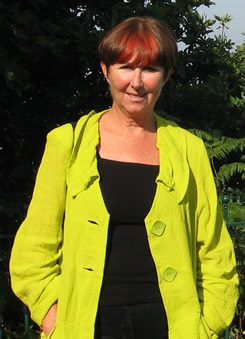 Deborah McDonald was born in South London but did not stay there for long as her parents dragged her, at a young age, to live in Australia. Her father was a journalist and the writing bug must have been passed down to his daughter as she always had a pen in her hand and a yearning to learn.

However, in order to earn a crust, she went to work in Social Housing, which she quickly realised provided only a very small crust but was nonetheless rewarding. At the same time she began to study with the Open University. This was carried on despite moves to Reading, Beaconsfield and Exeter during which time she also gained a husband and two children.

Once the degree was finished, she began to look for other ways to fill her writing and research needs. This resulted in her first biography entitled ‘Clara Collet: An Educated Working Woman’. This was followed by ‘The Prince, His Tutor and the Ripper’, essentially a biography of JK Stephen and his relationship with Prince Eddy.

I am afraid there is nothing clever or witty to say about how I found the Andrew Lownie Literary Agency. It was simply a case of opening the ‘Writers’ and Artists’ Yearbook’ and looking for an agency that dealt with historical biography. This one fit the bill admirably so I began to subscribe to the Newsletter, which confirmed my hunch. I contacted Andrew who liked what I was doing.