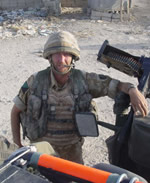 Doug Beattie is an Ulsterman born in 1965. For the first ten years of his life he moved around continuously as his father went from posting to posting with the British army. When the family finally returned to Northern Ireland they settled in Portadown. As with most other children of his generation he had his fair share of exposure to 'The Troubles', not least when one of his uncles was shot dead walking home, apparently killed as part of a loyalist feud. But thanks to the determination of his parents he managed to avoid being sucked into the spiral of violence. At the age of 16 he followed in the family tradition and joined the British army.

For the next twenty odd years of his life he spent almost half of that period away from home either on operation or training. He served in such places as South Armagh, Berlin, Cyprus, Bosnia and Iraq, and all the time he progressed up through the ranks. During the second Gulf War Doug Beattie was the regimental sergeant major of the 1st Battalion the Royal Irish Regiment, commanded by Colonel Tim Collins. Doug knew the colonel extremely well and was at his side when he made his famous eve of battle speech. Following the invasion of Iraq Doug was awarded the Queen's Commendation for Bravery for confronting a mob single-handed and stopping them from lynching supporters of Saddam Hussein.

In 2005 Doug was commissioned as a late entry officer and promoted to Captain.

The following year he was posted to Afghanistan, ostensibly to do a desk job at Kandahar airbase. Instead he ended up working as a mentor to the Afghan National Police. It was this role which saw him sent to the town of Garmsir to try and help the Afghan forces retake from insurgents what is known as the Taliban gateway to Helmand Province. During two brutal and bloody weeks of fighting Doug's life was constantly on the line. For his exceptional bravery and leadership he received the Military Cross.

On his return Doug started to write about his experiences as a way of communicating to his wife and children what he had seen and done. Only later was it suggested to him that the story deserved to be told more widely. The result was An Ordinary Soldier.

He had intended to leave the army in 2007 - but that was before his CO asked if he would return to Afghanistan for a second tour. His loyalty to his regiment and to the people of that country meant he immediately volunteered to do so, thus delaying his departure from the military till Autumn 2008.

Doug Beattie finally left the military in January 2009 after 27 years service. Except that wasn't quite the end of the story. Doug maintained a soldiering role in the Territorial Army and agreed to return to Afghanistan for yet another frontline tour - his third.

My co-author and I had approached a number of literary agents, all of whom we were sure could have done the job. However Andrew came highly recommended and when we went to see him we were convinced both by his enthusiasm for the project and his track record in the military history field which he is deeply interested in. His success in selling books in this genre (particularly those by Damien Lewis including Operation Certain Death) made us confident we would be in good hands.