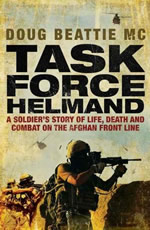 He didn’t have to. His decades of loyal service meant he had been due to retire from the Army the previous year. But that was before his commanding officer made a desperate plea - stay in and do just one more tour.

Not for the first time Doug’s loyalties were split; he was pulled between his love for his wife and children and an overwhelming sense of duty towards his other family, the Royal Irish Regiment. Once again it was the military which won the struggle for Doug’s heart and mind. He couldn’t turn his back on the men he had helped train - many of whom were young enough to be his sons - as they deployed to theatre to play their part in what has been described by military top brass as an unwinnable war.

But within days of arriving in Helmand Province for the second time the 42 year-old wondered just what he had let himself in for.

For six months he led Afghan and British troops into repeated battles with the Taliban. Doug took part in almost 50 major contacts (he knows this because he had to write reports on each one) and innumerable other, smaller skirmishes. The action was relentless. On occasion Doug and his men refused to return enemy fire, their sheer exhaustion meaning they just did not have the energy to do so.

Now Doug’s experiences – and those of his men – are documented in Task Force Helmand the sequel to An Ordinary Soldier.

The book offers another extraordinary insight into a campaign which is sucking in ever larger numbers of British service personnel. It gives a vivid, eye-opening portrayal of the reality of life and death on the frontline. The chaos and ferocity of the war against the Taliban are described with the utmost honesty and humanity by a man who first acts, then thinks through what he has done.

Doug describes the horror of seeing men die in front of his eyes. Of witnessing the death from coalition fire of a beautiful, captivating Afghan girl who he could do nothing to help. And he recounts the moment his Afghan colleagues held British troops at gunpoint before cold-bloodedly murdering a Taliban prisoner.

Doug counts himself extremely lucky to have survived a second Afghan odyssey. Luckier still to have, despite everything, such a supportive family to come back home to. Whilst he was away his daughter gave birth to a son, his first granchild; a grandchild who he can see, hold, talk to, go for walks with. Which, because of death or hideous injury, is more than many of the young men he served with will ever be able to do.

The Ulsterman has now retired from the Army. He has promised never to return to active service. Never again will he put his regiment ahead of his family. Just don’t let the phone ring…

Task Force Helmand once again it will be co-written with ITV journalist Philip Gomm.

Doug Beattie is an Ulsterman born in 1965. For the first ten years of his life he moved around continuously as his father went from posting to posting with the British army. When the family finally returned to Northern Ireland they settled in Portadown. As with most other children of his generation he had his fair share of exposure to 'The Troubles', not least when one of his uncles was shot dead walking home, apparently killed as part of a loyalist feud. But thanks to the determination of his parents he managed to avoid being sucked into the spiral of violence. At the age of 16 he followed...
More about Doug Beattie