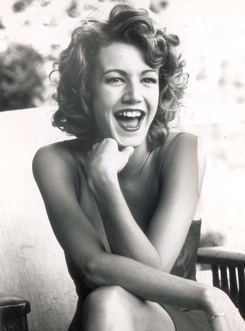 Emily Lloyd shot to prominence in Wish You Were Here but as the daughter of Only Fools and Horses star Roger Lloyd-Pack and Sheila Hughes, a theatre agent and former personal assistant to Harold Pinter, she was always destined to be an actress.

Emily attended the Italia Conti School in London at 15 and landed her first movie role a year later when she was cast as Lynda in David Leland’s highly acclaimed 1986 film Wish You Were Here, based loosely on the memoirs of Cynthia Payne. Her performance earned her a BAFTA nomination and won best actress at the Evening Standard Film Awards and from the National Society of Film Critics.

She moved to America and starred in Cookie, alongside Peter Falk, In Country, opposite Bruce Willis, and Chicago Joe and the Showgirl, with Kiefer Sutherland. Cast alongside Cher in Mermaids, Emily successfully sued Orion Pictures when the original director was replaced and she was dropped in favour of Winona Ryder and bounced back to star in the hit Robert Redford movie A River Runs Through It. During her time in Los Angeles she had relationships with rock singer Gavin Rossdale, movie star Sean Penn and Danny Huston, the son of legendary film director John Huston.

Emily returned to the UK in 1996 and starred with Sean Bean in the hit football drama When Saturday Comes, following that with a role in the critically acclaimed Michael Winterbottom movie Welcome to Sarajevo with Woody Harrelson and Oscar winner Marisa Tomei. She took the lead role in the independent British thriller The Honeytrap and appeared on stage as Ophelia in a theatre production of Hamlet in 2003, while her most recent movie appearance came in Riverworld.

Although she has starred in 19 films, Emily’s career has been curtailed by health problems. As a teenager she was diagnosed with attention deficit disorder and obsessive-compulsive disorder and for most of her adult life has been battling various forms of psychiatric difficulties. At her lowest points she has been admitted for treatment at clinics in America and the UK and struggled with insomnia, a side effect of medication she was given.

Despite her setbacks, Emily remains optimistic she can return to her great talent in life – acting – and hopes she can once again find a role that will reconnect her with her passion. She lives in London.