From Dachau to D-Day
Helen Fry 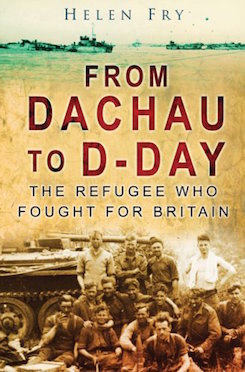 “But for all the risks, I never once regretted being part of the biggest invasion force ever to land in the Normandy beaches in June 1944 even though it brought personal losses.” – Willy Field

This is the true story of a Jewish refugee, born in Bonn, who was forced to flee the Nazi regime after miraculously surviving five months in Dachau concentration camp. He came to England where, after the outbreak of war, he found himself interned alongside thousands of other German refugees. In July 1940 he was transported with 2,000 other refugees to Australia on the infamous troopship Dunera. He likened the conditions on the Dunera during the 9-week journey to a ‘floating concentration camp’.

After a year in internment in Australia, Willy volunteered for the British Army and returned to England for training in the only unit open to him as an ‘enemy alien’, the Pioneer Corps. In 1943 he was permitted to transfer to a fighting regiment and joined the Royal Armoured Corps as a tank driver. On D-Day+1 he landed his tank on the Normandy beaches with his crew and fought for 11 months on the frontline through dangerous terrain in France, Belgium and Holland. He was the sole survivor when his tank was hit by a German 88mm gun near Nijmegen in Holland. Having been blown out of the tank, Willy crawled back inside to pull out his crew. Another German shell hit the tank and injured him. He managed to pull one surviving member from the wreckage, but he died on the way to the field hospital. The loss of his comrades that day affected him deeply for the rest of his life.

With a new tank and crew, Willy took part in the invasion of Germany and finally drove his crew and the Second-in-Command into Berlin. There he took part in the Victory Parade, driving his tank proudly passed Winston Churchill and the other Allied leaders. After the war, he discovered the awful truth that, apart from his twin sister, all his family had perished in the Holocaust. Reflecting back on his life for the biography, he commented that he chose to fight for Britain against his former countrymen to give something back to the country that had saved him from certain death.