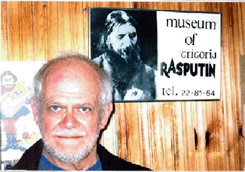 Dr. Joseph T. Fuhrmann fell in love with Russia and her past as an undergraduate at Emory University. His graduate degrees are from Indiana University. The first of the seven times he lived in Russia was in 1965-66, when he was an exchange student at Moscow University during an unusually chilly moment in the Cold War. He retired after a 43-year career as a history professor in the USA. Dr. Fuhrmann’s books include an edition of the 1,620 letters and telegrams Nicholas II and his wife exchanged during WW I and a 1989 biography of Rasputin. He died in March 2018.

A friend recommended Andrew Lownie as one of the very best literary agents. Andrew immediately answered my e-mail inquiry and in a day he had read the entire manuscript via electronic submission. I gladly confess that owe my new career to Andrew.