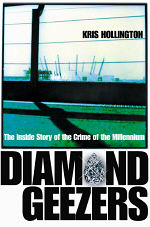 In November 2000, the most audacious crime ever attempted in Britain took place: the broad-daylight theft of a diamond collection worth £350 million from the infamous Millennium Dome, by a gang armed only with smoke bombs, stink bombs, a JCB, a speedboat and, bizarrely, a Catherine Wheel firework. The Diamond Geezers, a motley crew of petty criminals from south-east London, were desperate for cash and had nothing to lose; the gems were in a poorly-guarded tent by the river – how hard could it be? But the police were on to them: the capture of the Diamond Geezers would save the Flying Squad’s tattered reputation.

For the first time since that extraordinary day, investigative journalist Kris Hollington lays bare the bones of the case, using in-depth interviews with the Diamond Geezers, the police, Dome workers and De Beers employees to get to the heart of the heist. Discover who was crazy enough to want to buy the hottest diamonds in the world, as well as the shocking secrets of the globe’s most precious diamond collection. From the crime’s conception and execution to the notorious trial and appeal, it’s a gripping account of a remarkable true-crime tale.

On both sides, everything was at stake. This is the unbelievable story of the Crime of the Millennium.

Kris Hollington is a bestselling non-fiction author and ghost-writer of twenty books, several of which have been adapted for documentaries (including Channel 4’s Cutting Edge and ITV1’s Real Crime) and dramas.   The Interceptor: The Inside Story of the UK’s Elite Drug Squad, written with former Customs operative Cameron Addicott (Michael Joseph, July 2010) was adapted into an eight-part BBC1 prime-time drama series of the same name and broadcast in the summer of 2015.   Other books by Kris include Hurting Too Much: Shocking Stories From the Frontline of Child...
More about Kris Hollington