How to Kill
Kris Hollington 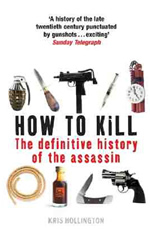 Exploding telephones, pipe-guns and bullets made of teeth, aspirin explosives, cobra-venom darts, a rifle that shoots around corners, a ‘piss bomb’ (10 cups of boiled urine mixed with nitric acid), exploding clams, samurai swords, karate chops, poisoned umbrellas and a fuel-laden light aircraft. Sometimes even a regular gun. These are just some of the methods that have been used over the last fifty years to speed 4,000 VIPs (including popes, politicians, presidents, prime ministers, pop-stars, spin doctors, judges, businessmen, writers, revolutionaries, actors, royals, generals and dictators) to a premature end.

Assassinations are the bullet-points of history. They are crucial moments where the destiny of thousands, if not millions of people rested (sometimes literally) on a knife-edge. Assassinations have devastating social and political effects, even when they fail. How to Kill is not an encyclopaedia of assassination but rather a gripping history that charts the development of the modern world through the eyes of the assassins that tried to change it. It is also a work of investigation, featuring shocking unknown stories of assassination; surprising conspiracies, and remarkable connections are uncovered throughout.

How to Kill relates the story of the man who shot Uday Hussein seventeen times, the remarkable career of the CIA’s ‘black sorcerer’, reveals how an East German Stasi agent, an American B-movie actress and a Saudi prince conspired to commit one of the most important assassinations of the 20th Century, uncovers the terrible history of South Africa’s brutal assassination squad and exposes for the first time the secret society that ensured racist assassins in the American Deep South never paid for their crimes. It also features previously classified information from the US Secret Service, including the story of how US President Jimmy Carter was saved from a sniper’s bullet by a rabid swamp rabbit.

This book is the first to study in detail not only the causes and surprising consequences of assassination, but also the crucial seconds of the act itself and the psychology of the assassin in an effort to understand why some assassinations succeed where others fail - and what might be done to prevent them. It is also the first book to examine the fascinating facts and figures of assassination, revealing everything from the success rate by type of weapon and the escape and survival rates of assassins to the most popular time of year and location for assassination. The definitive book on assassination, How to Kill shows that sometimes, one murder can change the world.