Hurting Too Much: Shocking stories from the frontline of child protection
Kris Hollington 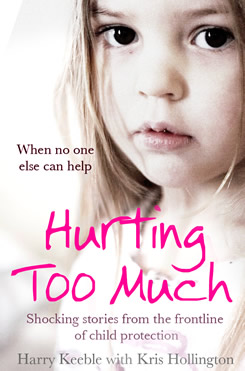 Hurting too Much is the third book in Harry Keeble and Kris Hollington’s Child Protection series, following on from the bestsellers Baby X and Little Victim.

In Hurting too Much, Harry relates the impact child abuse cases have had on a number of professionals, including lawyers from the Crown Prosecution Service, novice and experienced social workers, as well as a number of policemen.

Hurting too Much also examines the fallout for local communities as cutbacks come into effect and as councils axe services and jobs, putting even more strain on the police, Crown Prosecution Service and Social Services - making life easier for the abusers.

The stories in Hurting too Much are put in context of many recent headlining cases across the UK (from Vanessa George to the World’s Largest Paedophile Ring, exposed in March 2011) whilst also dealing with a number of controversial issues (including child access to chat rooms, sterilization of drug addicts, smoking parents whose daughter suffers Sudden Infant Death Syndrome, forced marriages, children left home alone while the parents go on holiday, etc).

Hurting too Much reveals why working in Child Protection has never been so tough. It also shows just how many courageous people are ready and willing to rise to the challenge. The problem remains however, that thanks to the cutbacks, more and more of Britain’s most vulnerable children are becoming endangered – placing incredible pressure on those whose job it is to protect them.