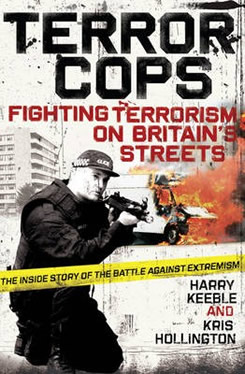 In response to the call to arms in the wake of the July 2005 London bombings, Harry transferred from Hackney's Child Protection Team to S-Squad, an elite counter terrorism unit.

From day one he was thrown into the front line of a number of heart-stopping operations that involved deadly armed hunts for suicide bombers and bomb factories. Harry was soon tasked to lead increasingly complex, sensitive and dangerous missions as part of the Met Police’s determination to thwart a number of highly organised terrorist cells.

Terror Cops includes the stories of the Haymarket bomb, the Glasgow airport attacks, the liquid bomb plot, how terrorist cells are created, the use of terrorist training camps in the UK, and how the police are attempting to work in tandem with the Muslim community.

Terror Cops is a white-knuckle ride into the battle against extremism. Like the authors' previous bestselling titles, Crack House and Baby X, the book will be written in Harry's distinctive voice and will give unprecedented insight into what it's like to fight terrorism in Britain today.

Kris Hollington is a bestselling non-fiction author and ghost-writer of twenty books, several of which have been adapted for documentaries (including Channel 4’s Cutting Edge and ITV1’s Real Crime) and dramas.   The Interceptor: The Inside Story of the UK’s Elite Drug Squad, written with former Customs operative Cameron Addicott (Michael Joseph, July 2010) was adapted into an eight-part BBC1 prime-time drama series of the same name and broadcast in the summer of 2015.   Other books by Kris include Hurting Too Much: Shocking Stories From the Frontline of Child...
More about Kris Hollington