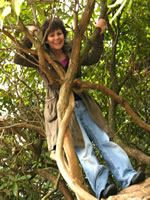 To say Marina Chapman has led a remarkable life is an understatement.

Marina has come a long way from the remote jungles of Colombia where she lived with a troop of capuchin monkeys for five years. Now married to an Englishman and living in Bradford, Marina has two daughters and works for an inner city children’s nursery.

In between she has led a Colombian street gang made up of homeless and orphaned children, worked in a brothel and as a slave for an abusive crime family in one of the deadliest towns in Colombia, lost three fiancées in untimely, violent deaths, faced depression and a suicide attempt and has become the head chef of a British national institution.

Marina is an exceptionally rare, arguably unique example of an abused, uneducated, feral child who has somehow survived and conquered her misfortune. Part of the wild child is still very much in her; she has spent much of her time in England embarrassing her kids by scaling trees in seconds, catching wild birds and rabbits with her bare hands, as well as milking the odd passing cow.

Her wild child still sometimes comes out at work, much to the delight of the children – especially when she brings in various creepy crawlies, amphibians and furry mammals.

Since arriving in England, Marina has dedicated her life to helping less fortunate people. She plans to donate her share of the profits from the publication of Wild Child to help finance charities that combat human trafficking, child slavery and abuse in Colombia.

Vanessa James is Marina’s younger daughter, a film score composer by profession. It was Vanessa who convinced Marina to share her story and to start this book project. She began writing in 2006, and after two years of piecing together her mother's tangled memories , taking a research trip to Colombia in April 2007, and re-drafting numerous times, Vanessa  completed the original version of the book.

I began looking for a literary agent by wishfully typing ‘Britains biggest and best literary agent’ into a search engine. I found Andrew Lownie. I called him up, surprised to be speaking to him directly, and annoyingly burdened him with many questions that a first time writer would. Andrew took the time to help me understand what a literary agent was and why I would find it beneficial. That week I called up many other agents but didn’t find they really cared, and had a ‘factory-like’ mentality when it came to publishing books. Andrew had a love for the stories. I went back to researching Andrew a little further and found he was perfect for me. He had worked with new-authors, specialized in non-fiction and was very highly regarded by publishers so had all the great contacts in the business. I submitted my manuscript and he called me the next day (on my birthday) to get things moving. And he really moved fast. He has been friendly, approachable and professional, and answers his emails immediately.