The Dead Duke, His Secret Wife And The Missing Corpse: An Extraordinary Edwardian Case of Deception and Intrigue
Piu Eatwell 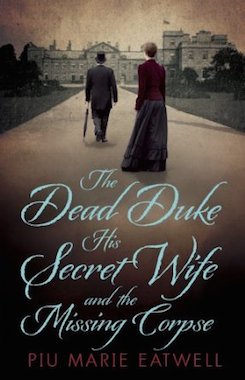 In 1898, a little old lady stunned the Ecclesiastical Court of London with an extraordinary request.  Anna Maria Druce, an ex-governess, claimed that her deceased father-in-law - one T.C. Druce, a successful Victorian businessman and furniture seller in Baker Street - had in fact been no less than the late 5thDuke of Portland, and therefore one of the richest men in the country.  Her case was that the Duke spent six months of the year disguised as her father-in-law in Baker Street. Her application to the court was for his tomb to be opened, to prove that it contained no body, but just lead.

Mrs Druce was helped in her case by the extremely reclusive character of the 5th Duke of Portland, one of the last and greatest of English aristocratic eccentrics.  Known as a “burrowing duke”, the 5th Duke had a complete aversion to being seen by any person, a phobia that led him to excavate a warren of subterranean rooms connected by tunnels under his sprawling estate at Welbeck Abbey, stretching over several miles.

The legal battle between warring factions of the Druce family over the exhumation of T.C. Druce’s grave was to occupy various courts in London over the next ten years, becoming one of the most notorious trials in Edwardian England.  The issues in the case - double lives, secret goings-on behind closed doors, children whose true parentage was concealed or falsified - opened up the dark recesses of late Victorian and Edwardian society.  A repressed or hidden double life was an obsession of the time, represented figuratively in the literature (the double life of Dr Jekyll and Mr Hyde, the lunatic asylums of the novels of Wilkie Collins), real life (the secret mistresses and hidden families of many "respectable" public figures), and the nascent science of Freudian psychoanalysis which was beginning to attempt to rationalise the feverish nightmares of the age with scientific discipline.  When the order to open the grave was finally made in 1908 – ten years after the original litigation had started – nobody knew what to expect.  All that was certain was that the case had held a deeply unflattering mirror up to the duplicitous times.  Was Druce the Duke?  More importantly, were the Edwardians all that they presented themselves to be?