We Know All About You: The Story of Surveillance in Britain and America
Rhodri Jeffreys-Jones 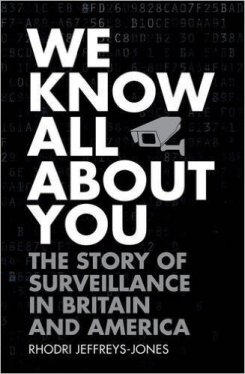 Modern mass surveillance did not begin in the furtive corridors of Whitehall and the Pentagon. It began in the American Wild West, among the ruthless union-busting private detective agencies, and from there it evolved in leaps and bounds through the ages of cable, telegraph, telephone and cable, into the age of Facebook and Twitter. For the first time, this book brings together the whole history of mass surveillance – its practitioners, its targets, its whistleblowers. From Allan Pinkerton to Edward Snowden via “Blinker” Hall and Joe McCarthy and Duncan Campbell, it tells a human story that nobody can afford to ignore.

• Most sensitive information held on individuals is in the private domain. This book is the first authoritative examination of the historical background to that phenomenon.

• It uniquely uncovers the roots of mass surveillance in the history of US private detective agencies.

• It is the first coherent treatment of the anti-surveillance movement, its motives, its arguments, its faults.

• The book gives a mauling to the idea of The Enemy Within. It argues that governments in the US and UK are fixated on surveillance, and recommends that policy should be more focused on reducing the causes of terrorism.

Rhodri Jeffreys-Jones was born in Wales and received his higher education in Aberystwyth (BA, Alun Lewis Memorial Prize), Michigan, Harvard and Cambridge (PhD). He held post doctoral fellowships at Harvard, Free University Berlin and Toronto. Founder and now honorary president of the Scottish Association for the Study of America, he is emeritus professor of history at the University of Edinburgh. His books have appeared in several languages. They include In Spies We Trust: The Story of Western Intelligence (OUP, 2013) and The American Left: Its Impact on Politics and Society since 1900 (Edi...
More about Rhodri Jeffreys-Jones