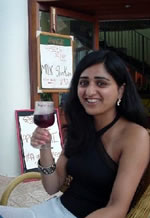 Smita Talati is currently writing her first novel Viennese Waltz as a PhD student in Creative Writing at Royal Holloway University. She trained as a dancer, and took a first degree in Dance at Roehampton University in 1993, before becoming a financial journalist at the age of 24. She wrote a column Money Makeover on the back page of The Sunday Times' Money section for five years and was a regular contributor to the money pages of The Daily Telegraph, Evening Standard, Mail on Sunday, Financial Times and several women's magazines. She is the author of three books on money and property; the most recent being Perfect Money Saving, which was published in January 2011 by Random House. She has an MMus in Advanced Music Studies from Royal Holloway University, and won first prize at the Royal Holloway Student Entrepreneurs competition in October 2012, to launch a new money-saving website

I came to Andrew Lownie from another agency. The things I value most about Andrew's approach are his efficiency (e-mails are answered immediately), integrity and genuine enthusiasm for books and new projects. Authors need to know quickly if an idea is not working or can be better developed in another way. Andrew gives considered feedback immediately rather than leaving you hanging around for weeks on end. He works hard for his authors, even when they don't appear to be writing!