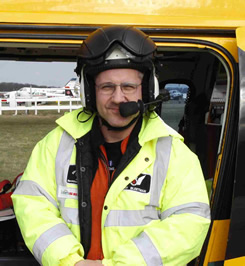 Tony Bleetman is a consultant in Emergency Medicine and an air ambulance doctor.

He grew up in London and went to live in Israel at the age of 17. After medical school he served in the Israeli Defence Forces as a soldier, a trainee helicopter pilot and finished his service as a military doctor in the anti-terrorist unit.

In 1991, having tired of Middle East politics, he returned to the UK and embarked on his career in Emergency Medicine. Throughout his career, he has been active as a volunteer doctor, responding for the ambulance service to offer advanced medical assistance at difficult scenes. He joined his first air ambulance unit in 2003 and went on to become the medical lead for three air ambulances in the West Midlands. He left this role in 2008 and continues to fly as a doctor with a new air ambulance unit in Bristol.

He was awarded a PhD for his work developing body armour for the Police and continues to work alongside the police, hospitals and government agencies on the safety of physical interventions and less-lethal weaponry.

He is a qualified pilot, owning a small aircraft and enjoys gentle aerobatics.

After writing my first book, I trawled through the long list of literary agents to identify one with an interest in medical tales. Andrew Lownie’s agency is almost unique in accepting submissions by email. Within hours of submission, Andrew telephoned me and expressed his interest in taking me on. Within a week, we had signed a contract and planned a series of books.