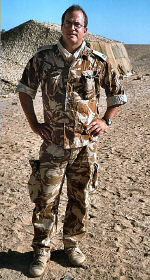 Adrian Weale was born in London in 1964 and educated at the Latymer Upper School, York University and the Royal Military Academy Sandhurst. He served for several years as a military intelligence officer in the regular Army, before leaving to pursue a career as a writer and historian.

Since then he has written eight non-fiction books under his own name, and ghost written several more, primarily for former Special Forces personnel.

In addition, he has written widely for the UK national press and is a regular broadcaster on BBC TV and radio, specialising in military and intelligence related subjects.

In 2003 he was recalled to the Army for service in Iraq, where he was appointed Chief of Staff for the Coalition Provisional Authority in the city of Nasiriyah, in effect governing a province with more than two million inhabitants. He is currently working on a new history of the SS for Little, Brown.

Adrian Weale is married with three children, and lives in London and Shropshire.

I left the regular army just before Christmas 1991, not entirely sure what I wanted to do but absolutely certain that I didn't want to become a corporate drone of any sort. Still in the first flush of freedom, and thinking that writing a book might be a good idea, my girlfriend (now my wife) dragged me, kicking and screaming, to a pre-Christmas drinks party with some friends of hers. Hovering closely by the wine and canapas, I started talking to a pleasant chap who, it seemed, had been told I'd just left the army. The conversation moved on to what I was planning to do now; I told him I was thinking about writing a book (I already had an idea, which I'd worked out in some detail). Much to my surprise he told me he was a literary agent: what did I want to write about? I went home and posted him a copy of my synopsis (this was in the days before PCs and laser printers: my Amstrad PCW took about two hours to print a six page document). He sent it back: not good enough yet, but he'd take me on as a client. I rewrote the synopsis and, within three months, he'd got me my first book contract. Blimey! All of a sudden I was a professional writer.