Life in the Boarding Bubble’ is an entertaining, sometimes shocking account of Andrew Cunningham’s 30-plus years in the ‘Boarding Bubble’: the privileged world of Britain’s top senior boarding schools.

The reader encounters a host of unforgettable chapters: like Jimmy, housemaster of ‘Hotel California’, Dougal, Top Dog at ‘Surrey School’, who seems above the law, even in France – and of course Glen the gruff Northerner, who nearly had a punch-up with a Famous Poet. And they’re just the teachers.

Then there are the boarders themselves: like Cecil, the perfect Chinese pupil; Disapproving Donald, who believed most teachers favoured sixth-form girls; ‘Hooray Harry’, the reluctant rugby player; and of course, the Troublesome Toffs, who made his life a misery once and come back to haunt him, when least expected. Then there’s ‘Celia Carlisle’, a favourite at ‘Chick City’ and the ‘Prince of Cool’, whose sad fate he tries his best to forget. And not forgetting Hector, the sixth-former who brought a crowded curry house to a standstill.

The various Heads he’s had to contend with over the years also feature: some slack, some scheming - like the Machiavellian ‘Rottweiler’, on a mission to shake up a complacent school and boost flagging boarding numbers.

Some of his escapades are near-farcical, like the time he was nearly kicked out of The Globe, leading a school Theatre Trip. Or the ‘partnership’ with a Birmingham comprehensive, which ended up as a car-crash. Exploits also include early days as a new teacher: speeding up the Thames in a school launch, open-air pools and whisky galore – then move on to ‘Toff Towers’, where he encounters a macho culture, everyday sexism in the classroom, wigs and weirdos, too much sherry at lunch and ‘Chick City’. There’s an inside account of how Red Nose Day and the School Liberation Front nearly brought a famous school to its knees. And then there were those attempts to perform the Macarena at a Silent Disco at a very smart girls’ school...

He’s missed a class where a boy had to be taken to hospital, kicked a door into an affluent boarder’s face - and been totally sozzled far too many times to mention, both with ‘beaks’ and boarders. And he’s broken the rules on Covid with recent leavers. But there are sombre times too, as he reveals how even privileged boarders have their crosses to bear.

His ordeals in the horrendous job of ‘house-mastering’ teenagers, boys and girls, are described: including the horrors of the traditional ‘House Bang’ – a barbaric practice. Meanwhile, his own young family take a back seat, while he stays up late on the look-out for cannabis-smoking boarders.

Rugby, Cricket, Football, Rowing: he’s coached them all – with challenging results, on and off the pitches. His Grand Tour of the Great Public Schools of England with sports teams is recounted with relish.

Two eye-opening overseas trips also feature: to Beijing, in the early days of boarding’s efforts to woo Chinese pupils; and to a smart American ‘Prep’ school. As do late-night parties in ‘Hotel California’ and the trouble these cause. And the book is top-and-tailed with his rivalry with Jimmy, who puts him through the mill towards the end of his career, for old times’ sake.

Life in the Boarding Bubble references just about every major boarding school in Britain – and quite a few in the USA too – so a wide readership should be guaranteed. Teenagers are teenagers whatever their background and there will be plenty to interest any parent.

Crucially it’s written from the view of the classroom, the boarding house and the Sports pitches – the three places where you find out what really makes top boarding schools tick - and not by an office-bound head. 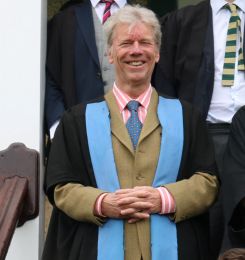 Andrew Cunningham was educated at St Paul’s School and the Universities of Aberdeen, where he was Union President and Exeter, where he gained a Ph.D on Thomas Hardy. After working in advertising and for ‘The Observer’, he started teaching at Pangbourne College in 1988 and has been teaching English at a number of well-known senior boarding schools ever since. During that time he has ‘run’ both a boys’ and a girls’ boarding house and been heavily involved in independent school promotion. A former editor of the HMC schools’ magazine, he has writ...
More about Andrew Cunningham