In the 1930s, the artist Edna Clarke Hall was famous. A star of the Slade School, her 1920s solo shows sold out and her work was exhibited at the V&A and British Museums. So why haven’t we heard of her?

For years, Augustus John’s claim, that ‘the burdens of domesticity’ ended the promising careers of his female counterparts at the Slade, remained largely unquestioned. As a result, Edna Clarke Hall has been overlooked. Her friend Gwen John has recently been retrieved from obscurity. Now it’s Edna Clarke Hall’s turn.

This first, full-blown biography of Edna Clarke Hall re-establishes her as one of the most original British artists of the early twentieth century and reveals the darker story beneath her struggle to remain true to her art.

For Edna Clarke Hall, drawing was a compulsion she was forced to hide from her disapproving husband. Yet despite this, and the demands of motherhood, her work developed and established her as a leading contemporary artist. But it was not just her husband’s disapproval she had to contend with.

Based on thorough research of archival sources, Edna Clarke Hall: A Portrait examines issues ignored or glossed over in previous, shorter, biographical works. The result is a narrative that unfolds along unexpected and sinister lines; a story reminiscent of Effie Gray and John Ruskin’s.

As a barrister, William Clarke Hall devoted his life to the protection of children. He was also a member of the Victorian male cult of the girl child, the ‘Cult of La Fillette’. Exploring the impact on Edna, the exact nature of her relationship with the poet Edward Thomas and her subsequent breakdown, Edna Clarke Hall: A Portrait reveals how it was her art that saved her. 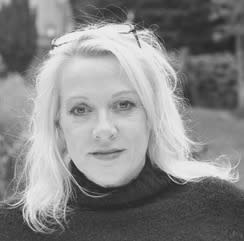 Charlotte Peacock holds a First Class Honours degree in English and a Master’s with Distinction in Biography and Creative Non-Fiction from the University of East Anglia. Her first biography, Into the Mountain: A Life of Nan Shepherd, was published in 2017 and was followed by her edited collection of Shepherd’s writing, Wild Geese, in 2018.  Originally from Gloucestershire, Charlotte was educated at Christ’s Hospital. After a career in PR and marketing, in 2001, she moved from London to Suffolk to raise her two small daughters. There, needing work she ...
More about Charlotte Peacock