When in April 2012 Katreen is dumped by her boyfriend, a man who'd confessed his undying love for her on their third date, seducing her with talk of marriage and starting a family, she is left devastated. After three years, and two failed rounds of IVF, as well as a series of painful events, including the untimely death of her father, he ends the relationship. Thus, at the age of 45, she has no other choice but to move out of the house they shared and begin her life anew.

With the encouragement of girlfriends, all of whom are married with children, she decides to return to the dating scene in search of love.

There is Jakob, 27, a personal trainer, with his bright blue eyes and strawberry blond curls, who offers to train her for free for an upcoming Tough Mudder challenge. Then there is Ben, 39, who tries to sneak his business card into the pocket of her bathrobe when they first lock eyes at a spa on the Baltic coast. Then there is Tristan, 32, who she quickly discovers has a cuckolding fetish. And then there is Milo, 35, a former boxer, who she meets one Christmas Eve while lying naked in a hotel sauna.

Sex with these men is the most exciting sex she's ever had. Their bodies are honed and beautiful and their sex drive insatiable. On the cusp of her 50th birthday, she is radiating confidence as well as having the time of her life in bed.

But these relationships aren't just about sex. She finds herself falling in love with Jakob, who can't wrap his head around the fact that she is 20 years older, and who continues to end the relationship only to start things up again weeks later. She also finds herself falling for Ben despite the fact that he has a live-in girlfriend. Even if he does leave her, she'd never be able to trust him knowing he'd managed to keep his affair with her a secret for so long.

Then at a Christmas ball, Katreen meets Alexander, 44, a handsome architect, who immediately sends her heart aflutter. Finally, she thinks, she's met the One. However, 18 months later, at the start of the Covid pandemic, he abruptly ends things.

The following summer, Katreen flies to San Francisco to visit her mother where she finds a box of love letters written to her 30 years ago by various boyfriends, ex-boyfriends and suitors, many whom she met while travelling through Europe, prompting her to reflect on the men she has been involved with over the last three decades. 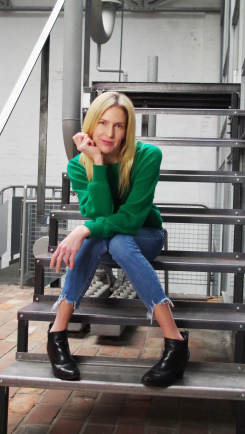 Katreen Hardt has been a freelance journalist for 15 years and an actress for over 20 years, performing in theatrical productions across Germany. She has written regularly for leading UK women's magazines including Grazia, Glamour, Cosmopolitan, Look and Marie Claire, as well as the newspaper the Daily Mail. Other women's magazines she has written for include Fabulous, Healthy, Woman & Home, Easy Living, Reader’s Digest, Woman, Woman's Own, Best, Reveal, Mother & Baby, Pregnancy & Birth, Eve and Buzz. Katreen specialises in real life stories, from the tale of an Afghan r...
More about Katreen Hardt