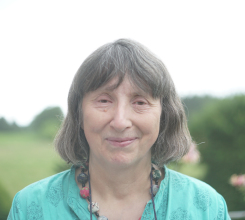 While growing up in post war Edinburgh, with holidays off-grid in rainy Argyll, Louise Ramsay’s favourite school activity was writing stories. Later, just after graduating from Cambridge in Anthropology, she decided she was really a novelist and began her first book. Her impecunious retired army father persuaded her that earning a living was a more urgent priority, and she sidelined the writing for that purpose, and later, after marrying, in order to bring up up four children in a dilapidated castle in the uplands of Perthshire. Money was tight, so with another Perthshire mother she started a business to try and bring some in. Other strands were an interest in psychology that took her into counselling training and practice, and a passion for environmental campaigning. She joined and ran as a candidate for the Scottish Green Party and later supported her husband’s campaign for the reintroduction of the European beaver to Scotland, co-founding a charity with him. Alongside these activities she attended creative writing courses, wrote short stories, articles and poems and finally the long deferred novel. The Anthropology (although not useful in any measurable way) gave her a tendency to view her own life with an outsider’s eye, and thus to be able to harvest it for the purposes of fiction.