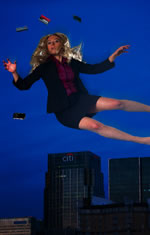 Barbara Stcherbatcheff landed her first job in the City in 2004 after attending Colgate University in New York, and then the Tuck Bridge Program at Dartmouth. She was admitted as a trader on the Eurex in 2006 and passed her FSA exams in 2008. She began her column as The Londonpaper's "Citygirl" in 2008, taking over the slot previously occupied by Geraint Anderson’s Cityboy column, which exposed the excesses of life in the City before the banking crisis hit.

I saw your agency on the internet, and that you had a great reputation. Simple as that.