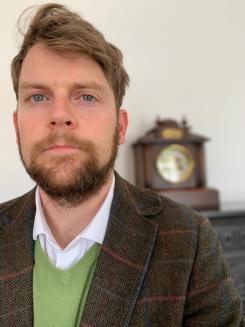 James read law at Warwick before attending law school at the University of Law in Bloomsbury, London, where he taught piano in his spare time.

In 2010 he joined a law firm in the Sanctuary Buildings, annexed to Westminster Abbey, where he qualified as a tax lawyer. He now practices in Mayfair for Forsters LLP, a leading English firm of solicitors, where he advises many UK and Middle Eastern clients. He has been recognised as a 'Prominent Lawyer' in his field (Citywealth Publication) and has been three times named as a 'Top 35 under 35' practitioner (EPrivateclient).

In January 2016 he began researching Churchill's career at the Exchequer, applying his deep knowledge of tax. He has a long standing interest in political history, having also studied politics at the University of Liverpool under a number of British and American professors, many of them left-leaning.

Outside of writing and the law he was Treasurer of Christ Church Spitalfields (the "Cathedral of East London") from 2017 – 2021. He also plays in a country and western band, although they are yet to take the world by storm. He is married with two children.